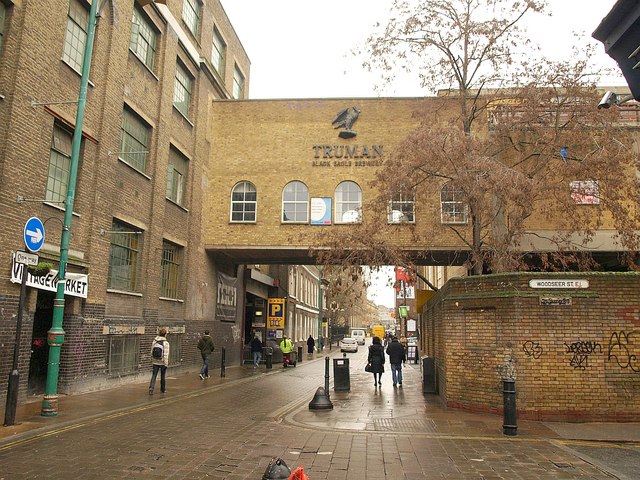 Today we ate the exact same thing, strawberry jam and butter sandwich, and milk. I also had some cherries. Then we went out. There weren't much people, then we went to King's Cross Station and took the tube to Aldgate, where we walked for a distance to Brick Lane. Brick Lane means bricks, bricks mean houses, houses mean walls, and walls mean graffiti. There were a bunch of graffiti. Public drawing on the ground, walls, were tradition. We saw this building with meals of different cuisines. I liked none of them. THen we went to this vintage place unerground. It was super duper creepy. There was also this fire alaarm ringing. We were the only ones who responded. I hope there wasn't a real fire. There were more food, more graffiti, more accessories, and there was also a kid playing songs everybody knows like "The Alphabet Song" and "Twinkle Twinkle Little Star" on the saxophone. My uncle bought some chocolates (6 pieces) for just about £10! Well, it was still a bit expensive because it equals 400 NTD> Then we exited Brick Lane, and took the tube to Covent Garden. There I kept winning in BTD Battles, and Stormraiders. Then my uncle's friends came, and we chatted about: stuff. Then the food came, and I ate chicken and duck, they were too hard. On the comments sheet, I wrote a bunch of comments, usch as add a TV, add more cheesecake types, and the meat is too hard. I'm a a boss at writing commnets. THen we watched this steetshow where this guy attempted to free himself from inside a tennis racket, half naked, and chained up very tightly! Harry Houdini did the thing, under 3:16. This guy got it under 2:00! (two minutes, zero secs). The next show, was this guy, who used two sticks and tossed stuff around. He did a stick, who we first batted a metal bat around the guy, second he juggled a bigger bat with his sticks, then huggled a two ended spear on his head. He then juggled a Second War War hand grenade, an illegal knife, and an active chainsaw! It was scary trying to watch him lie down on needles. He even asked someone to put pressure by standing on him! His back was full of blood. Then we saw this guy perform a vanishing trick. He attempted a trick no other magician could do. He was awesome! He once told this guy to give him a dollar. He cracked this egg, inside the egg was a walnut, he stepped on it, and there was his money! Then, we took the tube again to South Kesignton, where we went to the Science mueseum. We went to the airplane exhibits, where I saw my favorite plane, the Nazi Messerschimitt 109. We then were rushed out of the second floor then out of the gift shop. We then went to the courtard to find another show, a circus guy performing really well. I found 21 pence on the ground, where my uncle used one penny to make a wish. We ate at Eat Tokyo again, then came back home to prepare for tomorrow's flight.

That's pretty much the same picture, just that the picture is blurry.

I'm watching the guy doing the Houndini Trick. Sorry, Houdini did it underwater, this guy did it on land, so a person just dumped a bottle of water on him.

That is Harrods, one of London's most famous and oldest department stores.

Me inside the cockpit of a plane, inside the Science Mueseum somewhere in South Kensington. Even though this place had more activities to do, the British Mueseum had a more variety of choices to visit, and koay restaurants.

96% Complete (success)
©2018 Benlung.tw - Benlung.tw is a copyrighted website. All photos are not labled for reuse, and please do not use them unless you get permission. Try to get permission by sending an email to lungb@mca.org.tw.