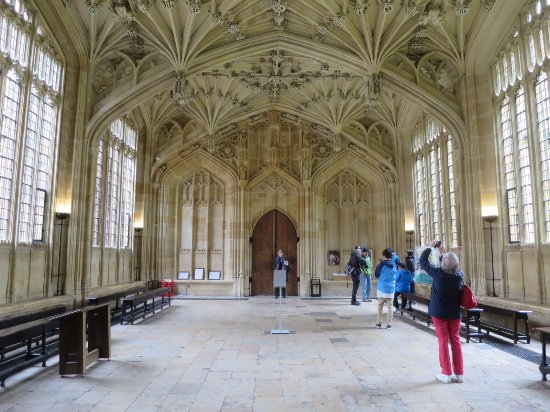 Today I woke up at aabout 7:30 in the morning. I played BTD Battles, then ate breakfast. It was the same as ever, milk, strawberry, smoke sliced salmon, cheese, and bead. I finished it very quickly. Then I went to Vincent with his phone. We watched videos of dads destroying their kids' electronics because the kids were addicted to them, and also watched a boring video of a video game of someone playing called Overwatch (no offense to the people who play Overwatch). We were planning to leave at 9:30 in the morning. Yep, we took a train from Paddington to Oxford. There, we saw the Oxford Castle & Prison. We didn't go in because it was closed, so we just went by it. Then, we went to this shopping place, because there was a bank where I ate a burger and Vincent got bolognese. Then we went to one of the colleges of Oxford. There we saw people with frosting-ish stuff all over themselves with confetti. It was a graduation from college party, I think. There we went to the Bodleian Library. Vincent and I both got audioguides. There was a part called the Divinity School. It is in the Bodleian Library, also the place where part of the Harry Potter movies were filmed (hospital wing, Yule Ball practice room, Charms classroom). We went passed the Nuffield University and went to the Magdalen College. There, Vincent and I got free entries! It was awesome, we got to hear their choir, go to their two chapels, and did some walking around. While we were in the courtyard, Vincent and I played photobombing. There were still some students there, so we were a little bit too loud. Then we had afternoon tea, where both of us had apple pie, and then I got some apple juice. They were all very delicious. Then we walked all the way back to the Oxford train station. As we went back to Paddington, we played yes/no games, and Paper.io, a conqering territory game. They were all very fun. Later back at home, we played UNO with poker cards and threw them around. Both of us (Vincent and I) had chicken katsu for dinner. Then I slept, which should be an obvious thing.

No idea who that guy is, probably some guy famous in Oxford...

I took this awesome picture of an Oxford College. I forgot which one it was.

Here are some flowers in that Oxford College.

Here is part of the Bodleian Library. Bodleian is pronounced BOD-lian. And that's a tower.

I have no idea why I took that picture. That's just a sign in the Bodleian Library. I took that when we were getting audio guides.

Here I am back at that tower, but listening to the audio guide.

There I am in the Library's courtyard, well part of it.

That's another place in the Library's courtyard.

This should be familiar, the place in Harry Potter.

We are looking at a garden.

I am in front of a garden. There is a fence because someone said it's either sacred/forbidden/against the law to walk on the grass.

That's a chapel, and my blank expression...

29% complete (warning)
©2018 Benlung.tw - Benlung.tw is a copyrighted website. All photos are not labled for reuse, and please do not use them unless you get permission. Try to get permission by sending an email to lungb@mca.org.tw.